Was "offline" for nearly an entire week. Hurricane Laura started moving through northeast Louisiana last Thursday morning. High wind and rain. Power failed around 8:30am that morning, so as of then, I had no electricity OR internet access. After the second day without any electricity at all, Andrew suggested renting a generator, so we could at least plug in the upright freezer, his small window unit air conditioner, and a few fans to circulate the air, since the daytime high temperatures were going to be in the mid-90's the next few days.

We found a rental place with one generator still in stock. In order to get it to the house however, Andrew went and rented a U-Haul van, since my Ford Ranger is still sitting under the carport unable to run reliably. He and I unloaded it, hooked it up, and got the appliances running the way we planned. The generator ran around 14 hours on a 5-gallon tank of gas, so for a couple days, I was making two trips out daily in mom's car to fill our 5 gallon can. I tried running by a few places to find a second can, so I'd only have to go out ONCE daily to get gas, but the three places I looked (including Walmart) were completely sold out.

The person renting mom's trailer since she moved in with me came over to talk to her late Sunday. He and his girlfriend just bought a house and are in the process of moving (so that much MORE less income we'll have unless I get SSDI payments soon). He said he just bought a generator to use at their house, since they were without power also. He told me the place he bought the generator, Grainger, had plenty of gas cans, so I figured I'd go by the next morning to check, because we weren't sure how long we'd be without power.

Mom and Andrew went back to the rental place Monday morning to re-up the rental on the generator, this time for a week. The initial rental was for two days. After they returned home, I hopped in mom's car to see about a second gas can and fill up our existing one. As our former renter said, Grainger has plenty of gas cans. They also had D-sized batteries (for our flashlights), which I also couldn't find anywhere else.

After re-uping the rental on the generator, getting a second gas can, and restocking on batteries, wouldn't you know it... around four utility trucks appeared on our road Monday afternoon and started working on the lines. Our power was restored around 7:30pm that evening. So, we were without electricity around 4½ days total, a "record" for all the years I've lived here. Previous longest outage I recall was the ice storm back in the late 1990's. Power then was off only 3 days. Our power MIGHT have been restored on the road sooner this time if it weren't for the huge-ass tree that fell over the road and onto the utility lines just down from the house the day the storm moved through. Power was on just up the road from us at least part of the time while ours was still off. Tuesday morning, Andrew rented another U-Haul van and returned the generator. The rental place reimbursed us for the time not used.

Even though power was restored Monday evening, Comcast internet was still down. It is Wednesday morning around 9:30am when I am typing this post in Notepad. Still no internet available. I'll be copying/pasting this post when Comcast DOES get things up and running. When I called them yesterday, the automated system estimated tomorrow (Thursday) around 11:45am for internet to be restored. If it is accurate, that will make a FULL week I have been "offline", so I'll have a TON of "catching up" to do. If you see this post before the estimated time, then you'll know internet was restored earlier.

The few calls we've made have been with the "emergency" flip phone, since our home phone relies on the internet to work. Unfortunately, since it's mainly an emergency phone, only a couple relatives have the number, because most of the time that phone is in a certain room plugged into the charger until we leave the house. Mom and I give our home phone number to our doctors, etc., so there may be a lot of calls we have missed during this outage.

Worst thing about the power outage for me was the COLD showers I took in the evening before going to bed. Since I did a ton of sweating during the day, even with the one window unit A/C and the fans, I didn't want to go to bed all "sticky". Cold showers are a shock to my system. If the power had been out another day or so, we would have had to go to a washteria to do some laundry. I was running out of things to wear that fit me properly (what with my weight fluctuations since the esophagus surgery), and Andrew only has two sets of his work uniform.

No one expected the power outages and other damage we got here in northeast Louisiana. Normally, during a hurricane, the southern part of the state gets hardest hit. This time, it was US. Our parish, Ouachita, was the second hardest hit in the state, with a little over 60,000 outages. First was Calcasheu Parish, with over 80,000 people without power. 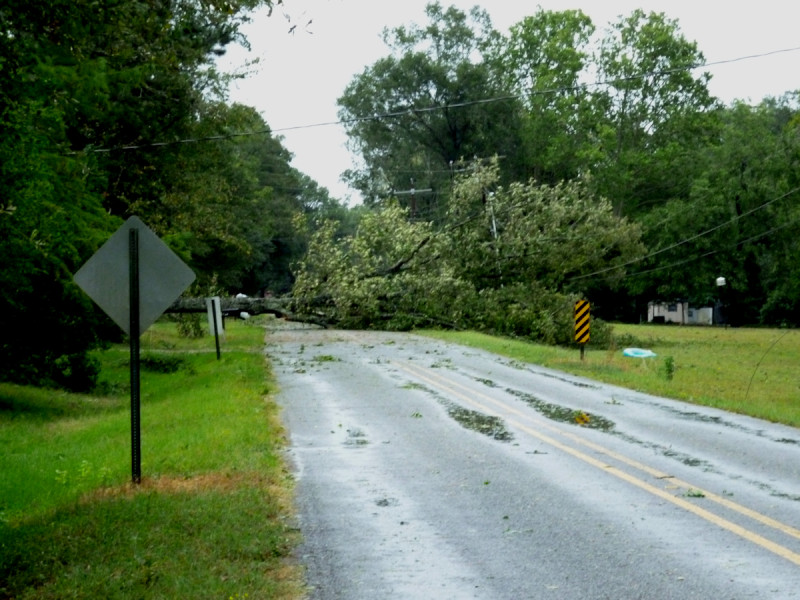