Went for my second esophageal stricture dilation procedure this morning (would have been the third if they could have finished the first attempt). They widened it a bit more, but the doctor said surgery might be in order in a week or two. He said (thank goodness) that it didn't seem to be cancerous, but rather caused by acid reflux and a hiatal hernia. If they don't remove the part with the narrowing, it will be a recurring problem.

I'm currently back home (a bit woozy still from being put under for the procedure), but mom is still at the hospital in ICU. She drove me there as she has for the other procedures where they were going to sedate me, but today, after we parked and she made the walk to the front entrance, she suddenly got all shaky and out of breath, bad enough I had to find someone to get her a wheelchair. They took her to the ER while I went on to my appointment on the second floor (she told me not to miss my appointment).

After getting voicemail on both Uncle Barrett and Uncle Floyd's phones for the first few calls, I finally got in touch with Uncle Floyd. After dropping his grandson off at school, he went by Uncle Barrett's and woke him up by knocking on the door. They showed up at the hospital before I was taken back for my procedure. They stopped off first and saw mom, who they said was in decent spirits. I'm guessing she had another COPD spell like the one she got last week after going out to the mailbox. They will probably keep her at least overnight. It's her first time (that I know of) being admitted to Conway Hospital. She usually uses Glenwood, but since she was already there at Conway... I'm sure her insurance will cover it. She's still got her government Blue Cross plan from her years working at the post office, plus Medicare, and hasn't had to pay for ANY hospital stays or doctor visits since she retired.

Anywho, Uncle Floyd went on home, and Uncle Barrett stayed until my procedure was over so he could drive me home (in mom's car). He had to take mom's car home with him in the meantime (since I was told not to drive for at least 24 hours). Tomorrow, he'll bring the car back, and I'll drive him back home.

In other words, this has been a "clusterfuck" of a Monday. Also, with all the Iv's I've gotten the past couple of weeks, my arm looks like it's been used for target practice... 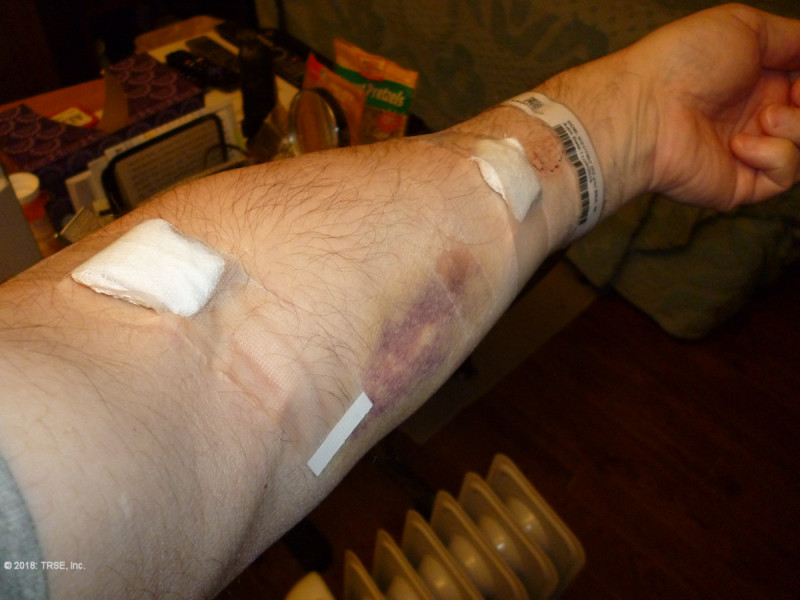