Received an email yesterday from Twitter notifying me I got a Direct Message from @WBHomeEnt stating I won a Blu-ray of "The Exorcist", after I had retweeted the appropriate tweet the other day during the giveaway.

Well, so far, I can't send them the info they requested (name, date of birth, mailing address), because they haven't followed me back. The way Twitter Direct Messages work, you can't send one to someone unless they follow you. I get that error when I attempt to send them my info. I'm NOT putting the info into the PUBLIC timeline, because of the possibility of trolls.

Same thing happened last year. I had "won" a book from @nationallampoon about the making of "Animal House". Got an email notification of the Direct Message, but THEY ALSO didn't follow me so I could send them my information, so I never got the book. Guessing this will turn out the same way.

UPDATE: Apparently I'm not the ONLY one... 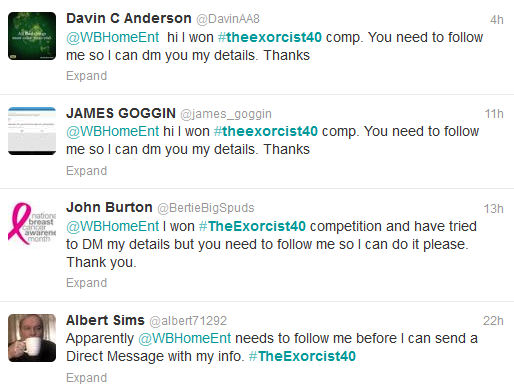 Today, our regular mail carrier CONFIRMED our suspicion that our substitute mail carrier is a looney tune.
Collapse