I think about my first love, Barbara, quite often. Unfortunately she married someone else. We DID, however, "hook up" twice in 1997, after my divorce was done. She showed up at my door one evening. One thing lead to another, she started it first, so, of course I went along with it. Couple of days later, she had me at her house. Her "old man" was off hunting that day. Risky, but again, I went along with it.

After that second time, I didn't hear anything else from her. Was hoping she might have become a "friend with benefits", but guess it wasn't meant to be. That was also the last time I had sex.

Haven't listened to most of my CDs in YEARS... think the ex might have taken the Dire Straits "Money for Nothing" CD when she left also.

Reason I discovered it, one of moms friends wanted me to make a copy for him, I went looking for it, and it wasn't there!

UPDATE: Nevermind... it was in the wrong place... Andrew found it! 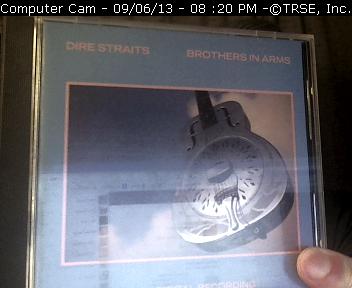