Severe thunderstorm moved through the area last night. LOTS of thunder, lightning, and rain. Severe lack of sleep on my part also. Cat hid under the sofa most of the night. Front webcam caught a brightly lit sky at 10:22pm last night... 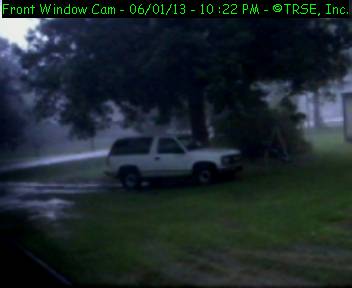 Heh... Leo got a call from a woman on his "Tech Guy" show just now, her problem was that her desktop PC was randomly typing, without her doing anything. She was using a wired keyboard. Leo asked if she had tried a different keyboard, because the one she was using might have a short in it.

She said she tried the WIRELESS keyboard that came with the computer, and didn't experience the issue. She said she had given the wireless one to her daughter to play with.

Thus the issue was resolved!
Collapse