This is going out to that thing I used to be married to... IF you're reading this, you can't get here soon enough to get that kid of yours. He's had an attitude problem since returning from south Louisiana.Mom and I are sick of him. About ready to kick him out to the street!

Apparently the ex told the boy while he was down there with her this recent week that I would "sell" all the electronics in his room while he was away in school. As a result, he locked his bedroom door this morning. He keeps dirty dishes in his room still, even after being told hindreds of times since he's been here to take them to the kitchen when finished with them, so mom this morning tried to collect them, then discovered the door was locked.

No issue to unlock the inside doors of the house. The knobs are the kind, that to unlock, you just stick a skinny object in the outer hole, it unlocks. He told mom after he got in from school, he locked the door to keep me from selling his stuff. ONLY place he could have gotten an idiotic idea like that would be from the looney I was once married to. As old as everything is in his room, one would be lucky to get $200 for EVERYTHING in his room.

Overheard him one evening talking to someone online (when I was in the bathroom, close to his room), telling them a local game reseller wouldn't offer him anything for a PS1. He thinks it should be worth close to $200 alone apparently. It's a USED electronic, an OLD one at that. Failure of the electronic could happen fast. No one will spend that kind of money for that unless it was never used, still sealed in the box. Before his demented "friend" Kyle offered to pay his traffic fine, he was somehow under the impression he could get $1000 for his nearly 4 year old 40" Sony LCD. Kid has NO idea of electronic depreciation!

Even IF I wanted to try and "sell" the old electronics in his room, it wouldn't be worth the effort, no more money than the stuff would be worth now. He thinks he has a "fortune" tied up in them still, but he's delusional. 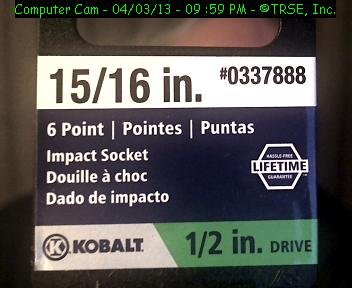