The past couple of weeks, I was getting emails from Verizon Fios for a "Emiro Lopez". They weren't "phishing" emails, because the links went to Verizon. I mentioned it on Twitter, got a response from Verizon Support. DM'ed them his name, account number, and the Gmail address they were mistakenly sending them to.

This morning, got his online bill in my email. It included the last four digits of his phone number. Andrew decides to do a Google search for the name and the last four digits. He finds a "Emiro Albert Lopez,Jr.", 65 years old, and a complete phone number, located in New Jersey. Since Andrew is the only one in the house with a cellphone, and it won't be long distance like it would be on the house phone, he calls the number. He talks to the guy. The guys Gmail account name is the same as mine, except his last name is in it, between the "albert" and the "65". The guy thanked Andrew for informing him, since he hadn't gotten ANY emails from Verizon since signing up for his account. He said he'd call Verizon to try and get things straightened out. Methinks Verizon probably goofed on the email address.

Wouldn't mind having Fios internet myself, but as far as I know, there are NO fiber optics run anywhere NEAR me!

In OTHER email news, got an email this morning saying "Welcome to Draw Something!" with my Gmail address and a password for a login. Never signed up for anything like that, and no links in the email. Wondering if someone signed me up for that without my knowledge. If they did, I'm NOT interested!

Andrew is out with his girlfriend this afternoon. As a result, able to watch "The Tech Guy" on the higher bitrate stream on the BIG TV for the first time in ages without having to worry about buffering because he's using bandwidth! 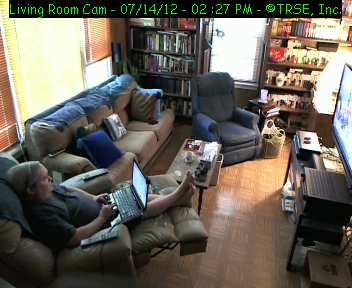