Mom, Andrew, and I watched my DVD of the Steven Spielberg movie "1941" this evening. One of my favorite films, but one you don't hear much about nowadays.I admit, I used to have a thing for Wendie Jo Sperber back in the day, ever since the show "Bosom Buddies". Too bad cancer got her at such a young age.

Watching the movie as many times as I have, you tend to notice a few inconsistancies...

1. As the two look-outs get on the big wheel the thin guy with the ventriloquist's dummy sits on the right. But later in the film he is on the left.
2. When Tim Matheson and Nancy Allen are flying in the plane, in a couple of shots, the pilot seat window has a bullet hole, other times not.
3. The amusement park ferris wheel lights stay lit, even AFTER it is knocked from its foundation by the Japanese submarine and rolls down the pier. Without electricity, that is impossible!
4. After John Belushi crashes his plane, he opens his parachute. The wire pulling the chute away from him is visible.
5. The front door of Ned Beatty's house is totally intact while it slides downhill. But in several scenes, the front door was broken several times.

Father's Day starts here in a few minutes. My dad wasn't overall the very expressive type, but I know he still thought the world of me. Also, over the years, the planet has become rather "politically correct", and a photo of a child in a bathtub with his father today would be considered something for what it's NOT. 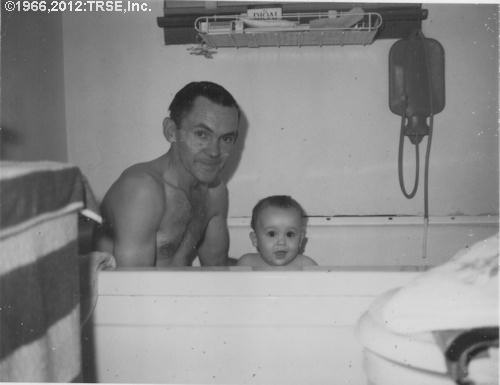